“It became clear in time that undoubted Men could under the domination of Morgoth or his agents in a few generations be reduced almost to the Orc-level of mind and habits; and then they would or could be made to mate with Orcs, producing new breeds, often larger and more cunning. There is no doubt that long afterwards, in the Third Age, Saruman rediscovered this, or learned of it in lore, and in his lust for mastery committed this, his wickedest deed: the interbreeding of Orcs and Men, producing both Men-orcs large and cunning, and Orc-men treacherous and vile.” (Myths Transformed, Morgoth’s Ring)

Liz Danforth’s MERP half-orc, better than any of their example illustrations in AD&D

Yuck. From the beginning of the orcs in fiction, the half-orc came with them. Weirdly, men-orcs and orc-men are apparently different strains. Their origins in Middle-Earth somewhat occluded and mysterious, as is typical for orcish lore, but apparently some kind of sorcerous eugenics program. Interestingly, men first had to be corrupted to a certain level before being made to mate with orcs, it doesn’t seem like the orcs themselves had any inclination towards this before Morgoth ‘discovered’ the process.

LoTR and D&D core rulebooks both say almost nothing about female orcs’ side of things, but they differ in important respects. In our previous post, we look at the almost unique aspect of sexual threat attributed to orcs in the MM, markedly different from LoTR’s magic breeding program. It certain marks out the orcs as more sinister. Goblins and kobolds will kill you, but orcs are an existential threat to your race. They’ll assimilate and corrupt humanity, turning us into a badass multi-classable warrior race with infravision, higher STR and CON but a pathetic clerical level limit and no arcane magic. Sounds like there might be a few upsides? Damn right, half-orcs are awesome, and fun to play, even if the text itself appears to want to beat you up for wanting to play one sometimes, saddling you with harsh ability maximum in WIS (so cleric multis would usually be pretty weak), the only demi-human to have limited levels in thief and unlimited in assassin. Clearly there was some pressure to embrace your evil heritage and dedicate yourself to promoting the ‘antithesis of weal’ by being a Fighter/Assassin. There’s also the implication that all your tendencies to bad behaviour came from your orcish genes, and your good behaviour from your human parent.

Damnit, Gygax, I’m my own person, demi-human, humanoid, or whatever.

My first ever D&D character was a half-orc, and while I can fantasise about rolling up the perfect fighter/cleric/assassin and going maximum half-orc on the world, it was mainly because I wanted to be able to use miniatures from my Warhammer Fantasy Battle Orc and Goblin army. 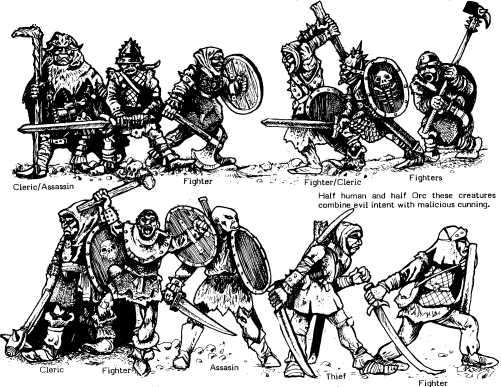 Warhammer half-orcs from before my time.

I didn’t know much about how the rules worked but made a fighter/thief so he could use ALL THE WEAPONS and CLIMB ALL THE WALLS! Half-orcs get really low starting age ranges and he ended up being 15 or 16 yrs old, just a little older than myself in real life. This was exciting, but adolescent me thought he seemed a little immature, so I made up a background for him where he was the adopted son of my half-elf druid (who was around 4o years old with 15 WIS so seemed plenty mature to me). My older self can ponder the interesting roleplaying possibilities given this kind of relationship between these two mixed race characters, one from each side of half-human possibility, but in the end it may be a good thing I didn’t invest too much in it, as Morglum the half-orc met an untimely death by way of dragon-fire when he was still in his teens, somewhere around the 5th level. Still, in his short life, I managed to squeeze some nice RP juice out of him, just by way of his age, race and choice of associates. A youngster raised in the druidic religion away from his original parents by a mixed race foster parent, Morglum was naive, good natured and believed in balance. The violence and sneakiness of his classes were part of nature, but he didn’t ‘get’ a lot of the racial conflict in D&D. Our early level adventuring took us through plenty of humanoid areas, and when about to meet orcs for the first times in his life, Morglum regretted that he had to end up killing a lot of them to safeguard his friends, and that so few of them were willing to listen to reason (he got burned early on by desperate humanoids trying to exploit his naivety). Still where orcs where concerned I had him negotiate and communicate whenever possible, including attempting to temporarily recruit defeated orcs (especially after our men-at-arms all died). A couple of times his ability to read and speak orcish turned up handy information, and he was would discourage unncessary slaughter of humanoids in favour of focusing on the main objective. This led to a fair few conflicts with the group’s main warrior, an elven ranger with exceptional strength, a damage bonus vs humanoids, and an itchy sword hand every time he had a chance to use it. Having a half-orc in the party definitely had a meaningful impact on gameplay, and although Morglum was never destined for name-level greatness, I’ve had a penchant for playing half-orcs ever since.

No prince charming, but he’ll get the job done.

Before Drizzt and playable drow, the half-orc would be my pick for the badass anti-hero kind of character, the self-reliant type who kicks-ass while working through his or her often literally teenage angst. Strong, tough, cunning, distrusted by communities or humans and orcs alike, it seems like they’re a perfect fit for the gritty adventuring life, which would provide them with the riches, comradeship, validation and power that they couldn’t get through normal channels. They mature quickly and have a short lifespan, no wonder the live-fast die-young dungeon raiding lifestyle would appeal. They’re the intersection between monster and man, the character that can lift the veil over the all-too-convenient tidy set up of good playable pretty races versus bad ugly monsters and mess things around. Plenty of  murderhobos of other races have, at some point in their career, realised that there might not be much to separate them in behaviour from the humanoids in the dungeon. The half-orc knows this right from the start.

While they share some bad-boy rebel appeal with the drow, half-orcs are less glamorous. Orcs have a much gritter, barbaric, even working-class vibe to them that’s at odds with the suave dark elves. Half-orcs even stir things up in the real world. Half-orcs (and their signature assassin class) were omitted from 2nd Edition AD&D in an effort to purge the game of controversial content. They were eventually restored in the Complete Book of Humanoids supplement, and regained their rightful place in the core race set in 3e. Sadly, the 3e half-orc was something like a hulk-like bruiser with an INT penalty as well as the CHA, similar in appearance to the WoW orc but a very poor choice in 3e character building system, especially since the lack of INT meant they had less skill points for thief or assassin- like roles. I always imagined them as more lean and wiry. Certainly stronger than your average human but not the juiced-up ‘roid monster a lot of newer half-orc character art puts forward.  In 4th and 5th editions, they are better choices, presented as natural beserkers, with their orcish blood acting as a kind of curse egging them on to violent rages. 5e fluff does take a more nuanced and realistic approach to human-orc relations along the lines of my suggestion in the last post. 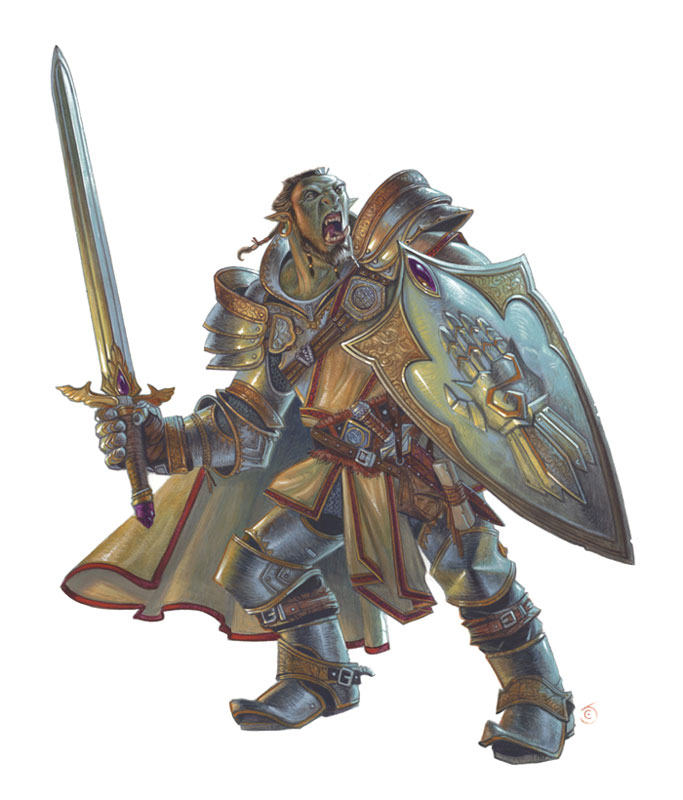 5e half-orc paladin. Continues with the trend of making them much beefier and more inhuman looking, but I like 5e’s treatment of half-orcs in general.

I’ll stick with my AD&D style half-orc for my old school games, though some good race-as-class variants have been offered up for B/X in the OSR blogosphere, with some emphasising the sneaky side of the race and other pushing the more modern beserker take. How do people feel about the half-orc out there? Are there still those out there think it’s inappropriate? For you 5e players, how does the modern iteration fare in play?

4 thoughts on “Orctober part 2 – half orc half biscuit”